DAX vs S&P 500 – INSPECTION OF A SPECIAL RELATIONSHIP

The Standard Poor’s 500 (S&P 500), launched 63 years ago in the United States of America, is one of the most quoted stock indices in the world. And as such, the index is not only a guiding force for the DAX in Germany but also for the leading indices of many other countries. Indeed, the famous saying “When Wall Street sneezes the rest of the world catches a cold” is not least a reference to the S&P 500: its loss of points sometimes leads to even more severe losses of other indices. Then again, when markets turn, the latter may recover more quickly than the S&P 500.

The prominence of the index as one of the best overall indicators of market performance can be ascribed to its great diversification: By tracking 500 US-based large-cap companies in various industries (all listed on the New York Stock Exchange and the Nasdaq), the S&P 500 represents the US economy as a whole. At least, that’s the intention. As a capitalisation-weighted index, stocks with higher market caps affect the average more. Yet, the selection of the components doesn’t follow strict rules. Rather, a committee periodically picks the companies based on criteria such as market capitalisation, financial viability, liquidity and length of time publicly traded. 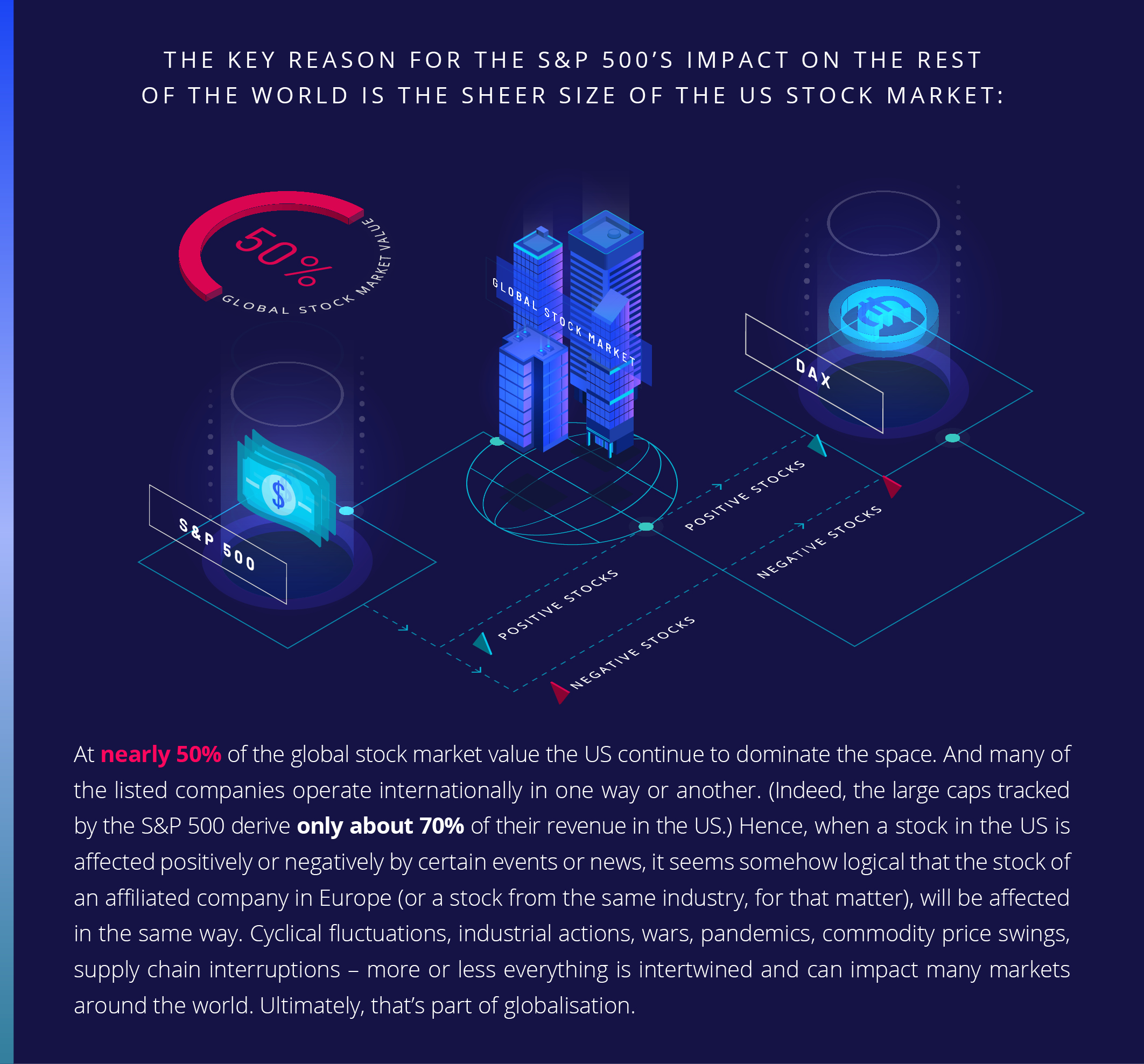 The DAX was created in 1988 and tracks 30 of the largest German companies, listed on the Frankfurt Exchange. The German stock index is sometimes described as the equivalent of the Dow Jones Industrial Average. That’s only true in so far as the German as well as the US index track a narrow selection of only 30 companies – meaning, they don’t necessarily represent their respective stock market or economy. However, unlike the Dow Jones – but like the S&P 500 – the DAX is a capitalisation-weighted index and as such includes by way of calculation re-invested dividends. In fact, usually a big part of the DAX’ as well as the S&P 500’s long-term performance can be attributed to the dividends paid to the companies’ shareholders, while the dividend payments have no or at best a very minor impact on the day-to-day performance of these two indices. There is, though, compared to the S&P 500, a difference in the way companies are chosen for the DAX: only the 30 largest and most liquid companies are included.

As so often with regard to equities, a lot of the individual performances and, subsequently, index performances come down to psychology. Undoubtedly, just like the media, many investors or traders keep an eye on the US equities futures to anticipate what direction the German stock market may take – and some base their trading decisions on that outlook.

It is needless to say that the extreme volatility in the markets due to the ongoing Covid-19 crisis offers a lot of opportunities when it comes to index trading. Actually, the highly liquid securitised derivatives on indices offered by Spectrum Markets have constantly been among the most sought-after products on the platform. Especially the DAX and the S&P 500 are continuously amid the top-traded underlyings, with retail traders taking long or short positions, using the venue’s cost-efficient and seamless 24 hours access, 5 days a week. Also available are derivatives on the Dow Jones, Nasdaq, FTSE 100, CAC 40 and other indices.

Get in touch to find out how your retail clients can get access, too.

Oil prices have recovered considerably from their unprecedented troughs in April. However, while the Covid-19 crisis rages on arou...

Mr. Maan, how would you describe today’s market for operators of trading venues? Both regulation and digitalisation have trig...

Brokerage firms offering online trading platforms to their clients find themselves facing a lot of competition. Some try to attrac...