Spectrum Markets, the pan-European trading venue for securitised derivatives, has published its SERIX sentiment data for European retail investors for March (see below for more information on the methodology), noting bearish sentiment towards the euro, particularly against the British pound and Japanese yen.

"The war in Ukraine has understandably unsettled retail investors, who shortened their euro positions in significant numbers last month. President Putin’s announcement that Russia would not accept payment in euro for gas exports on March 24th further increased pressure on the European currency, alongside an increasingly high inflation rate. The SERIX on most of the currency pairs linked to the euro went well below the neutral value of 100, hitting 92 against the yen and a record low of 76 against the pound,” explains Michael Hall, Head of Distribution at Spectrum Markets.

Eurozone inflation has been stoked in the last few weeks by higher energy and food prices in particular, which have risen dramatically since the invasion of Ukraine. The bloc already recorded a record of 5.9% in February, well above the European Central Bank’s 2% target, with most economists anticipating further rises to come. Uncertainty over the likely direction and strength of the ECB’s policy response remains a key factor in investor thinking on the currency in particular.

In contrast, retail investor sentiment appeared to favour the British pound, also against the US dollar, where the SERIX maintained the upward momentum seen this year and hit 103. This could be seen as a vote of confidence for The Bank of England's focus on tackling inflation, anticipating further targeted tightening of monetary policy. Alongside this, Britain’s economically-important service sector is less affected by rising energy prices.

Looking at the SERIX data for the top three underlying markets, the DAX 40 maintained its value at 100 and OMX 30 dropped one point to record a value of 99. Meanwhile the S&P 500 saw a similar decline, from 99 to 98, remaining in the bearish zone. 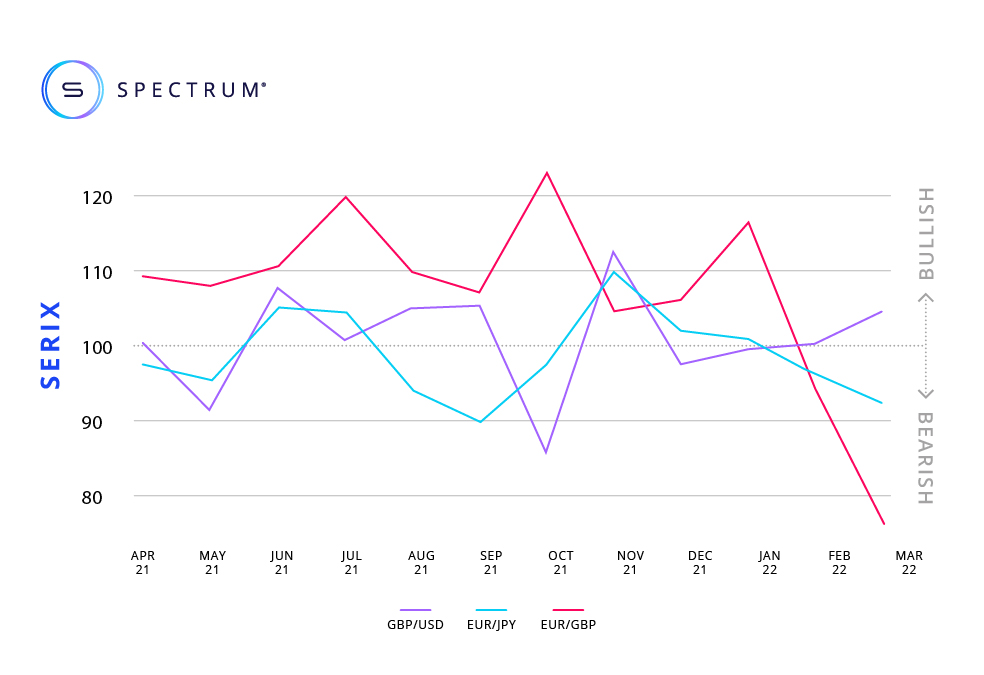