Spectrum Markets, the pan-European trading venue for securitised derivatives, has published its SERIX European retail investor sentiment data for November (see below for more information on methodology), which indicates a bullish view towards currencies where central banks are tightening monetary policy, compared to the US dollar.

Retail investors trading instruments linked to currency pairs on the exchange in November indicated a positive outlook for the Canadian and Australian dollars, as well as the British pound, against the US dollar.

The Bank of Canada indicated at the end of October that interest rates could rise in the second half of 2022, while the Reserve Bank of Australia sent its strongest signal yet that the emergency measures it introduced to support the economy during the Covid pandemic will now be wound back, paving the way for an earlier than expected interest rate rise.

Australia’s central bank left the official cash rate target at the record low 0.1% annual rate set at the November board meeting last year, though analyst attention focused on the shift in the language of its accompanying commentary which suggested a tightening of monetary policy could be on the horizon.

However, like many others in the market, retail investors were caught out by the Bank of England’s unexpected decision not to announce an interest rate rise in November. Bullish trading in instruments linked to GBP/USD peaked on November 4th, ahead of the Bank’s highly anticipated Monetary Policy Committee meeting, but sentiment dropped when no new policy measures were announced.

For much of last month the Federal Reserve stood out from many central banks by maintaining a looser monetary policy than several of its peers, leading investors to favour other currencies over the US dollar in the short term.

The SERIX chart on USD-linked currency pairs for November clearly reflects this movement, which shows sentiment towards the US dollar lagging when compared to the Australian and Canadian dollars and the British pound.

“After a long low-interest period it seems that most central banks are looking to flip the switch in order to control growing inflation fears. Retail investors have been looking for first mover advantage benefits throughout November and seem to have found this in the currencies of Canada and Australia, though many will have been left disappointed by a lack of action from the United Kingdom, ” explains Michael Hall, Head of Distribution of Spectrum Markets.

“The signals we are getting from central banks, and the actions they are taking, are currently being discussed in the market in quite contrasting ways with some, but not all, deciding to withdraw at least part of their stimulus measures. The Fed’s hesitation in particular has given retail investors some interesting investment opportunities”, adds Hall.

Looking at the SERIX data for the top three underlying markets, the NASDAQ 100 and DAX 40 were relatively unchanged at 98 and 99 respectively. Meanwhile the S&P 500 rose slightly, from 93 to 97, while remaining in the bearish zone overall. 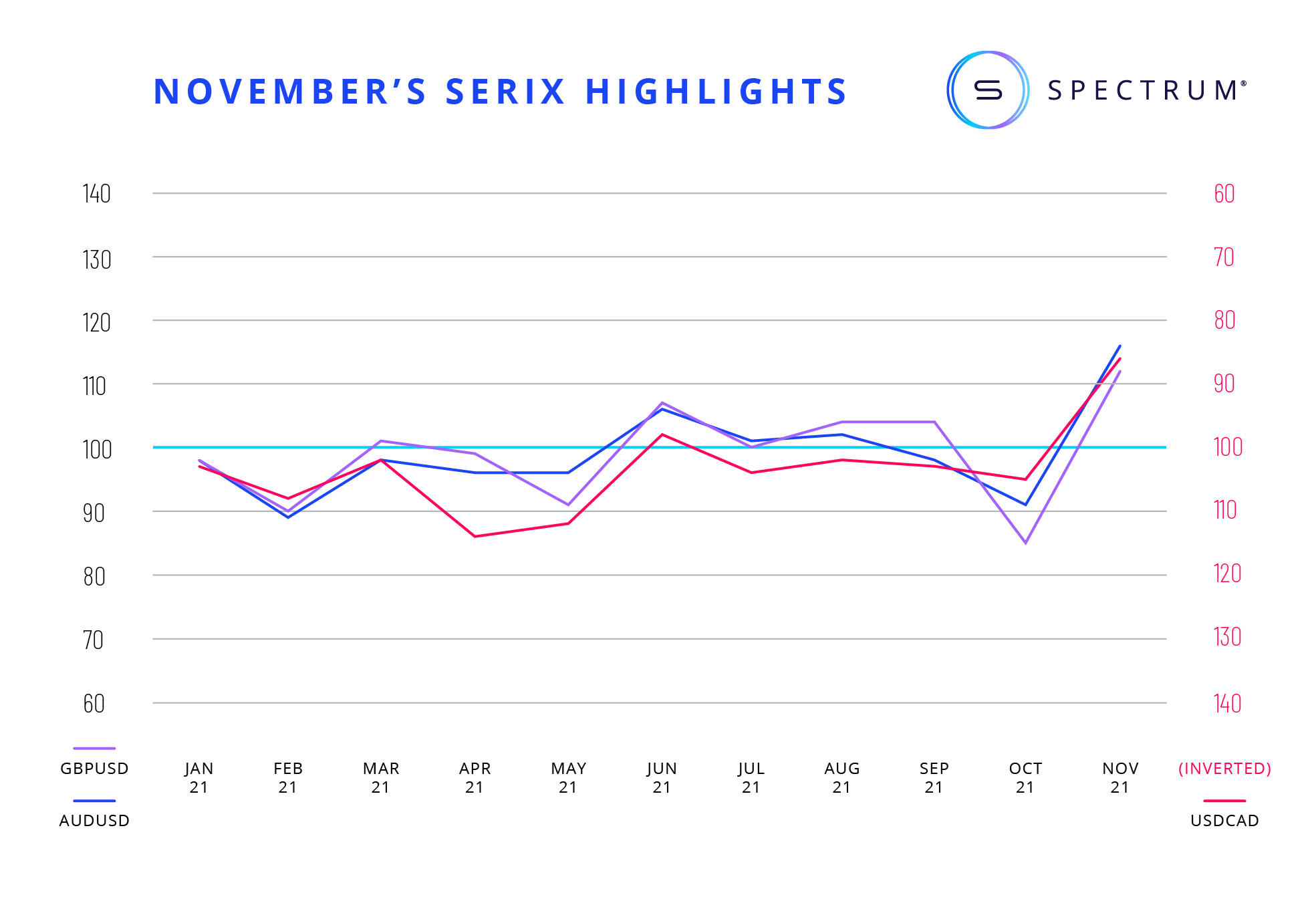 About Spectrum Markets
Spectrum Markets is the trading name of Spectrum MTF Operator GmbH. Headquartered in Frankfurt am Main, Germany, it is a pan-European trading venue for securitised derivatives aimed at financial institutions and their retail investors. Since launch, trading has been available in: Germany, France, Italy, Spain, Sweden, Norway, the Netherlands, Ireland, and Finland